Canine rivalry appears between dogs when there is instability in the hierarchy.

Body posturing and vocalization can be signs of your dogs establishing their dominance over one another. This is their ranking not your ranking.
Any attempt by you to establish which dog is top dog can result in increased aggression.
Recognize it is your dogs’ decision, not your decision. Dogs are social animals, however, they do not understand democracy.
Hormonal surges can affect the balance in a pack of dogs, which in turn can lead to aggression between each other.

Two dogs are a pack!

In a multiple dog home, one dog may feel the instinctive need to challenge the other dog for a number of reasons.
When left to ‘sort it out’ your dogs will rely on their DNA to establish their place in the pack or your family unit.

Owners can inadvertently tip the hierarchical balance by petting the subordinate dog or giving him/her privileges. This dog now sees himself with a high ranking, which gives him permission to ‘challenge’ the other dog, aggravated or re-directed aggression is sure to follow. Dogs of the same breed, dogs of the same sex, dogs from the same litter, small dogs, all understand the pecking order.

Top dogs will almost always be first in line for petting, eating, treats or going in and out of doors.

When dogs are mentally and physically challenged on a daily basis, they don’t need to seek fulfillment by aggressing their backyard buddy. This can be achieved by walking both dogs at the same time for a minimum of forty minutes.

Watch for signs of canine rivalry:

Owners need to step in and diffuse the situation if they witness any signs of appending conflict, they can achieve this with a firm, assertive voice command of ‘leave’, along with a  prod to the offending dog. Owners can be their own worst enemy when it comes to implementing the discipline necessary to break the circle of canine rivalry aggression within their dog pack.

Be the pack leader your dogs want you to be, understand the triggers, avoid canine rivalry and enjoy your canine companions. 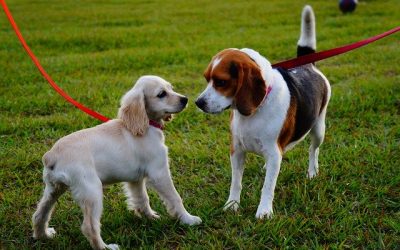 Off Leash Dog Parks can be very controversial,  with behaviour, etiquette or incident, topping the list.  ... 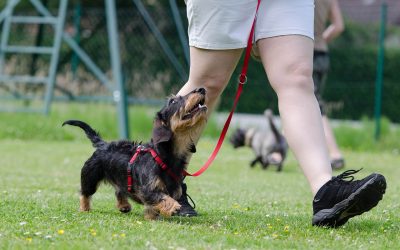 From around 5 months to 18 months approx. your puppy will begin his/her move into Canine Adolescence, you can’t stop...